How to enhance your sports webcast production with a pre-show

Too often during a live webcast, the production needs to take a break.  Instead of keeping the show going, the viewers see a graphic with the annoying phrase, "Up Next..." or loop of commercials.  Inevitably, viewers drop like flies.  When the program resumes, the webcast needs to rebuild its audience.  Rarely is a production able to recapture all the viewers it lost, as many viewers moved on to more engaging entertainment. As a result, your production throws away valuable minutes.

We recently had a situation where, due to weather, the event needed to start late.  It's an all-too-frequent problem in live webcasts.  And, as always, the viewers were tuning in right on schedule.  Whenever there is no streaming content, (or just the ambiguous "Coming Up!" graphic), viewers become immediately frustrated when they wonder when the event will start.  Many click on something else.  Others begin pursuing their literary careers as hateful little trolls.  In any case, whatever your treasured viewers are up to, it won't be lending a hand to make things run more smoothly.  Fortunately, we were already streaming a pre-show and merely utilized our "Plan B" to seamlessly cover the time until the event could get underway. Throughout the pre-show, we continued to pick up viewers, encourage social engagement and build the audience for the main event. 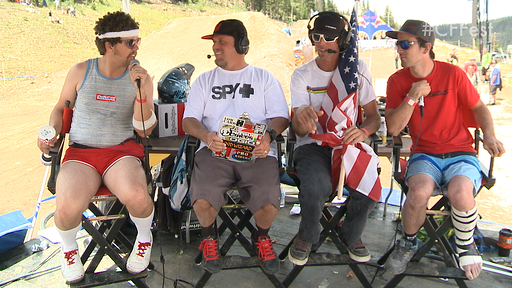 The pre-show literally saved the overall production.  Without it, we would have been broadcasting to a much smaller, much angrier audience.

Pre-, post- and/or halftime shows are some of the easiest and most inexpensive ways to improve your return from a live sports webcast production.  Typically, all the elements to produce a framing show are in place: equipment, talent and infrastructure.  All you need to do is script it and produce it.

While filling time is essential, there are a number of additional benefits from framing shows. Here are some goals to help you maximize the results you get from your live production.

Build an Audience:  Live streaming has a unique problem.  In television, if you begin watching before the start of your program, there is already content on the channel.  Your audience is entertained until the program starts.  In live streaming, there isn't usually another program leading in to your event.  Rather, most webcasts are preceded by placeholder or clock.  Your audience doesn't want to sit around for that.  Streaming content before your primary show allows you to capture early viewers and build an audience before your event begins.

Educate your audience:  The more a viewer understands a sport, the athletes and their stories, the more engaged they will become.  That is the reason NBC produces so many bios of olympic athletes for their Olympic broadcasts.  In webcasts, hopefully new viewers are constantly tuning in.  When they do, it should be the goal of every live stream to advance neophytes from casual observers to passionate enthusiasts.  If we're successful, we'll build an audience for future webcasts as well as increase their engagement during the current broadcast.  Since there is a limit to the extent that a webcast can delve into the athletes' stories during the events, the ideal time is to do this within the framing shows.

Interact with your audience:  It's a proven psychological phenomenon that "people have a greater tendency to continue an endeavor once an investment in money, effort, or time has been made."  It's called the sunk cost effect.  One way to increase one's investment in your production is to encourage them to interact.  By interacting, they are investing in your production, becoming more engaged and, inevitably, watching for a longer period of time.   Pre-shows are an ideal time to get your audience to interact with your hosts and athletes.

Get the word out:  If you channel audience interaction through social media, it has the added bonus of broadcasting your viewer's activities to all of their friends.  We've seen that on average, each comment, share or like attracts two additional viewers.  Thus, through interaction via social media, your viewers are advertising your production and growing your audience.

Don't lose your audience.  About the only thing more destructive to your audience than a lock down shot, placeholder graphic or commercial loop is to simply unplug your encoder and go to lunch for an extended period of time.  In either case, as soon as you stop your organized content, you'll begin hemorrhaging viewers.  The first rule of any half-time of mid-event programming should be DON'T LOSE YOUR AUDIENCE.  Keep the program running with analysis, insight, highlights, interviews, vignettes and giveaways and you'll have a much larger audience when you resume.

Keep them entertained.  Better yet, make half-time something to look forward to.  What will appeal to your audience is unique.  For the Tampa Pro, which serves a young group of skate enthusiasts, it's watching teens slog through a slimy moat while being pelted with eggs. While watching your audience members risk hepatitis infections might not be the right solution for your event, it's highlight of each of their broadcasts and actually causes a spike in their engagement.

Do a complete reset: Many of your viewers will begin watching your webcast sometime after it began.  It's frustrating and confusing (and less engaging) for them to not know what has happened.  A half-time show affords you the ability to completely reset your show by playing highlights and recapping story lines in order to orient any viewers who may have missed the most important moments.  It will not only make for more satisfying viewing, it will also improve engagement.

Reward your audience for involvement:  One of the easiest ways to ensure people will continue a behavior is to simply reward them for it.  If social media has demonstrated nothing else, it has shown that people crave recognition.  Recognizing viewers for quality interaction affirms constructive behavior and encourages other viewers to do the same.

Capture eyeballs you missed: At first, it may seem counter intuitive to put much effort into a post show.  The event is over, checks have been handed out, the athletes have gone home. How many more minutes are people willing to watch?

On the other hand, there are always a large number of interested viewers that missed your production.  A post-show enables you to quickly create content that will capture eyeballs after the event.  After all, highlight videos always make great content.  Since you have already recorded the best moments in your DVR, why not put together a show to capture those viewers that missed your event and capitalize on the investment you've already made.  All you need to do once the show is complete is export it and upload it to YouTube.

Set-up the story for next time:  Typically, a sporting event is not isolated happening.  A post show allows you to reframe the story and prime the viewer for the next broadcast.  As long as you have their attention, you may as well construct an advertisement for your next event.

What do you think?  What are some other effective uses of pre-, post- and halftime shows?