How Adrenaline Garage innovated to grow engagement for Formula Drift 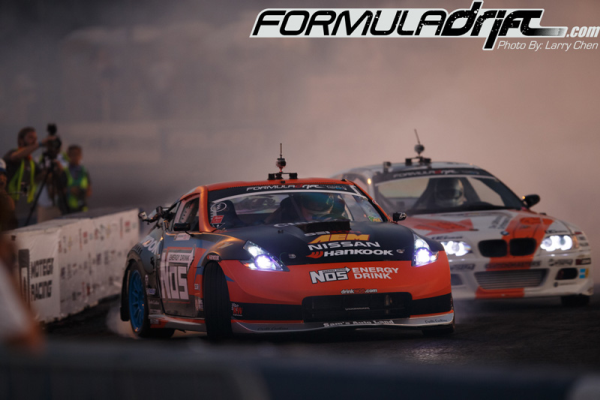 Formula Drift had a problem with their live stream.  They had exciting content, two cars drifting around corners door to door, trading paint, at 60 mph, but they had a hard time translating how that was a sport.  The judging was arcane.  The drivers were anonymous. The storylines were getting lost.

In partnership with Formula Drift, Adrenaline Garage came up with unique cutting-edge scoring solutions and incorporated classic storytelling techniques to better explain the sport and increase the viewer's engagement.

Developing a custom live scoring system that educates and informs

In order to make drifting more engaging as a sport, Adrenaline Garage had to develop a new scoring system.  A scoring system has two purposes.  The first is to determine, with as little controversy as possible, who won.  The second is to communicate and reward the winning characteristics that a sport considers most important.  For example, in many action sports, the criteria of the judging system includes such elements as variety, amplitude, difficulty and creativity.  Participants are rewarded for performing maneuvers that rank higher in each of those categories.

In drifting, the judges had identified crucial elements as Line, Angle and Style.  Unfortunately, there was still much disagreement about what performing well in each of those areas meant.  "I know it when I see it," was not good enough.

We worked with Formula Drift and the judges to come up with a more precise means of measuring each of those elements as well as translating that performance into a concrete score.  In the end, the solution was to deduct points at set locations on the course based on how the driver was performing in each of the categories of Line, Angle Style.  In this way, the the viewers could immediately see where one run was better than another and the drivers could easily understand what they needed change in order to score higher.

Here is how the system works:

Adrenaline Garage created the software that allowed the judges to input that data and quickly tabulate a score.  Without any further data entry, the score is then composited into a graphic and displayed on screen.  More detailed data is available on the web. 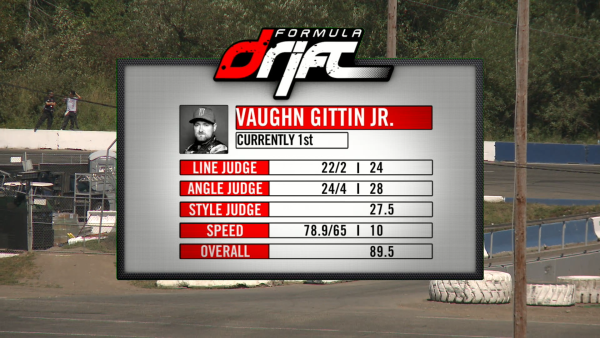 While a scoring system is one method of communicating what's good and bad about someone's run, Formula Drift wanted to preserve the overall impression system used in their tandem battles.  However, they still felt the need to communicate more information about why and when one driver was out-performing the other.

Our solution was to create a real-time feedback system, complete with custom hardware and software, in which the judges used a dial to indicate which driver was doing better.  The output of each dial is fed in real-time to a graph which is synched in the replay.  Sounds complicated?  Here is what it looks like.  The top of the graph represents the lead driver and the bottom of the graph represents the chase.  The greater deviation from the mean indicates how much better that driver is doing at that moment.

Enhancing graphics and video to convey the story

Context is important to any story or sporting event.  Context is what turns an ordinary game, something that happens thousands of times each year, into something that viewers pay thousands to see.  For example, each professional baseball team plays 162 games in the regular season for a total of 2,430 regular season games.  However, one game, Game 7 of the World Series, has special importance because we understand the history and momentousness of the event--its context.  In mainstream sports, viewers are inundated with context from numerous media outlets.  It's impossible to avoid the context of the Super Bowl in the media onslaught that leads up to that particular Sunday in February.

In action sports, we don't have the luxury of an unavoidable media blitz to inform our viewers about the context of our events.  Action sports rarely register a blip on the radar of mainstream media.  Any context we wish to provide needs to be handled within the broadcast itself.  For Formula Drift, we wanted to help viewers better understand when an exciting upset or season defining battle was about to happen.  In the big leagues, statistician handle alerting announcers to these stories by feeding them relevant information.  We don't have the budget for a staff of statistician so we tapped into Formula Drift's extensive database of previous events to instantaneously pull relevant data on the fly and display it on screen. 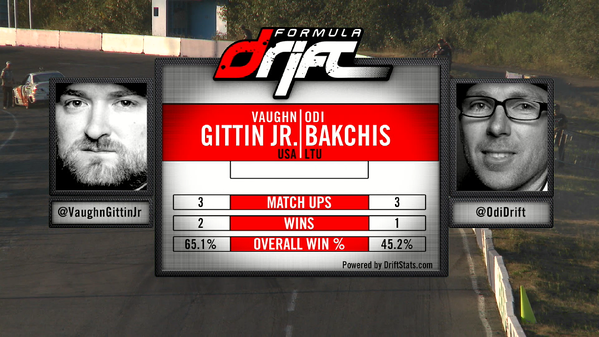 In addition, Adrenaline Garage built a library of video clips of past battles.  Whenever we feel the need to add context, the crew can reach into the library and at a moments notice, play relevant battles from both earlier that day and earlier in the season.

The result of all of these enhancements to the show is that when former Formula Drift Champion Vaughn Gittin, Jr.'s season is on the line and he's in danger of being upset by a spunky driver named Odi Bakchis, who's having the day of his life, our viewers are on the edge of their seats, gripped by the implications of that battle.

Need more viewers?  Trying to attract more sponsors?  If you're looking for an innovative way to improve your webcast's results, contact us today for a free webcast plan.  It's the first step to a producting a stunning cutting-edge live broadcast.