How many viewers can watch an HD webcast production? 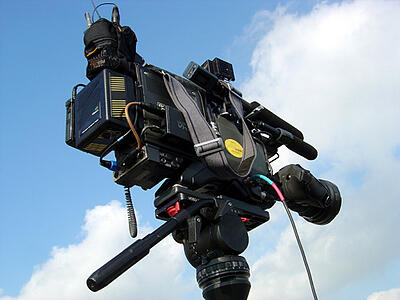 There has been an enormous boom in high definition webcasts, especially amongst the largest action sports events.  The Maloof Money Cup, US Open of Surfing, The Ride Shakedown, US Snowboarding Grand Prix and a number of action sports events have each chosen to do HD webcasts over the past year.

Just as the phrase "16mm Production" used to be an indicator of a top notch action sports videos, "Live HD Webcast" has become the shorthand that's synonymous with the best live online productions.  As "webcast" can mean many things, appending "HD" to the description of an live stream has allowed events to differentiate themselves from the incredible number of mediocre one camera productions on Ustream.

Before someone jumps on the HD Webcast bandwagon, I think it's appropriate to ask, how many people are actually able to see an HD webcast at it's highest quality?  Is HD worth it if only a few people can actually see it?  At what threshold does it make sense?

What does it mean to be HD Webcast ready?  As we set out to answer this, we had to nail this down.  Here is how we define HD readiness:

Without either one of these, the event and viewer would be better off with a lower resolution image.  In the first case, buffering will make it impossible for the viewer to watch the HD video. In the second case, there wouldn't be any noticeable difference between an HD video and one with lower resolution.  Thus, it's just a waste of streaming bandwidth.

To determining how many viewers are HD ready, we looked at our analytics reports from 90,000 users in the months of July and August, 2010.  Our hope was to find a sweet spot, a resolution that accommodates the real world monitor resolution and bandwidth of your event's viewers.  Here's what we've found: 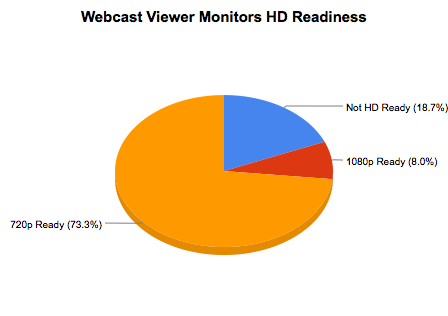 Deciding on a resolution

Looking at the data, if you only have one stream available, HD is not a good option.  However, since user bandwidth is the major limiting factor, using adaptive bit rate streaming creates a number of possibilities.

Adaptive Streaming works by "detecting a user's bandwidth and CPU capacity in real time and adjusting the quality of a video stream accordingly. It requires the use of an encoder which can encode a single source video at multiple bit rates. The player client switches between streaming the different encodings depending on available resources. The result: very little buffering, fast start time and a good experience for both high-end and low-end connections."[1]

The main advantage here is that you don't have to completely compromise quality for compatibility.  Adaptive bit rate streaming allows you to encode HD streams for high end connections and other streams for connections with less capacity.

Ideally, more streams of varying bit rates would be better.  However, the number of streams is limited by the capacity of your encoder and the upload bandwidth available.  Not having one or both means poor stream quality for your viewers.  You'll want to select resolutions that provide the best user experience for the largest number of viewers within the resources you have available.

1080p encoding is definitely not worth it.  The number of people who have 1080 ready monitors and connections is too small to justify the expense.

720p might be worth it.  To sufficiently accommodate users, you'll need either a very powerful encoder or multiple encoders as well a sufficient upload bandwidth.  In this case we would suggest encoding two HD streams and several sub-SD streams.

For events without those assets, based on the real world capabilities of viewers, sub-true HD is a very good middle ground that ensures most people will be able to take advantage of a high quality webcast.

What other considerations in webcast production would you like to know about?