What you need to know about HD webcast production

Sometimes it seems like electronics manufacturers want us to be confused. Buying a TV, or choosing a video production system for a webcast for that matter, means deth a relentless onslaught of bizarre technical terms and numbers, all of which you'd never need to know in every day life and will never think about again.  I think the worst part, however, starts just after you begin to understand what it all means.  Suddenly, you become part of a debate over what's better, which one is "True" and who's just out to get your cash.

It's enough to wish for the days of radio.  Oh wait, there was that whole AM/FM thing.

Here's the bad news.  Webcasting is no different and HD webcasts are especially confusing.  We think it's time to define the HD webcast.  Rather than enter the debate about what is a "True HD Webcast," which is a stupid esoteric argument that doesn't do anything to help you, we're going explain some different options and the trade-offs associated with each.

What makes HD different is resolution.

In online media, there is no standard frame size.  It can be anything and is not even constrained to 4:3 or 16:9 aspect ratio.  If you wanted to stream your event as a square or vertical video, super small or thousands of vertical lines, it's possible, it's just not recommended.

Because webcasters don't have to deal with the same standards as TV productions, a number of (confusing) options have been created.  Decreasing resolution is an easy way to lower a streaming video's bit rate.  Thus, webcasts have historically been encoded in sub-SD resolutions (180, 240 or 360 vertical lines have been common).

Now that HD webcasts are possible, it has only become more confusing.  Some people will say that HD webcasts must have the same resolution as HDTV.  Others say that it's any webcast over 480 lines (the vertical resolution of SD video).  With so many different options, here is our definition of HD Webcast:

An HD webcast is any webcast whose final resolution requires HD equipment to produce without having to resort to up-ressing.

Common HD encoding resolutions include 720x1280, 540x960 and 480x848. All of these formats are greater than SD resolution (480x640), thus to produce them without having to "create" pixels requires HD equipment. 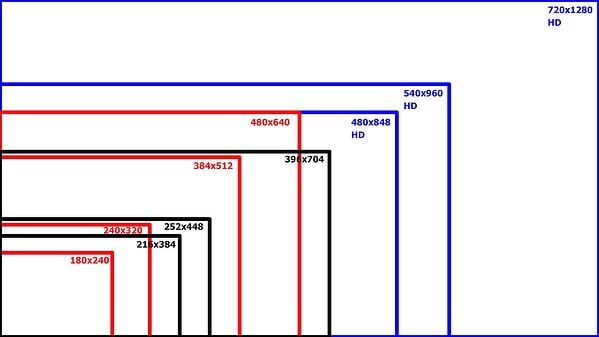 If you have the capability, why not just produce "True" HD?

Your HD strategy directly affects the value of your webcast.

The solution is to use adaptive bit rate streaming.  Adaptive bit rate streaming detects "a user's bandwidth and CPU capacity in real time and adjusting the quality of a video stream accordingly. It requires the use of an encoder which can encode a single source video at multiple bit rates. The player client switches between streaming the different encodings depending on available resources. The result: very little buffering, fast start time and a good experience for both high-end and low-end connections."

You're ability to use adaptive bit rate encoding will be dictated by:

While full resolution HD may not be right for you, thankfully, unlike broadcast TV, there are a number of options.  Based on what assets you have at hand, you can select an option that optimizes the experience and offer a stream that's better than what's possible on standard definition TV.

Whatever your situation, we believe, as an HD webcast provider, that you should choose resolutions not because of an esoteric argument about what is "True HD", but what maximizes the user experience for the largest segment of your audience.  The added benefit is that you won't waste money on excessive bandwidth and you'll get the most value from your webcast.